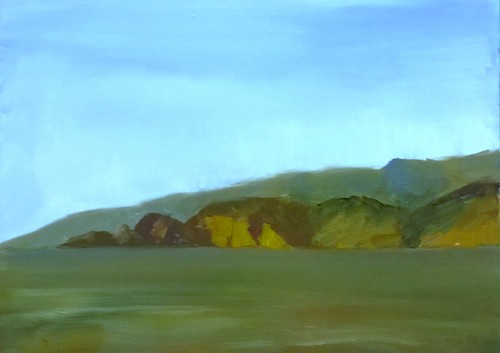 Tiny Painting At Baker Beach Before The Tide

I haven't been able to paint outside for the last few days because it has been too damn cold in San Francisco. Yes, all you people living in colder places are so much tougher than anyone living in San Francisco. Sure. Totally. But it was freezing and windy and sucked to paint under those conditions, plus I had a little cold so I stayed inside for most of the week. I'm a wuss.

Today I really needed to go out and get some sun, and I decided I would go to a more secluded part of Baker Beach that is shielded by some rocks and a cliff. Normally I just stop near the entrance and hang out there, but that's become boring. The only issue with painting by the cliffs is you can get trapped out there if you don't watch the tide. I found a small spot among some of the rocks, and did a tiny little test run using my "cutie kit". 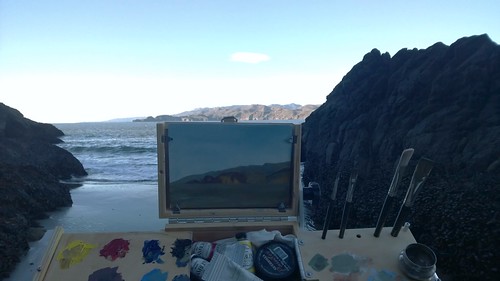 This kit has a thumb hole in the bottom so I can actually hold it and paint right on the panel while I'm standing. Very easy to do, and doesn't weigh too much as long as it's not loaded with paint. I managed to get this painting down in about 30 minutes then the tide was hitting my shoes so I bailed.

I ended up making the water way too green so it looks like a weird field of grass rather than water. There would need to be more reflected sky light in the water to make it look less like grass, and even though it was green, more toward the light and blue side than the red and dark side like it is now.

After this I decided to alter what's in the cutie kit slightly so that the box is lighter to hold and easier to work with while standing. I ditched a lot of the brushes I wasn't using, changed the colors to just 4 tubes (Yellow Ochre, Napthol Scarlet, Chromatic Black, Titanium White), and that makes it easier to setup and hold.

I also think that I'll lay the colors out and prepare them on the little palette before going out. Being as they're oil paint (well Alkyd with some medium I mix in), they will stick to the palette and just hang there without moving while I walk around. It's kind of a pain to be standing there in the cold watching the tide and trying to lay out blobs of paint before you can paint. A better option is to just have it already to go so I can just take it out of the case, open it up, and go for it.

Finally, I have additional tubes of color in the little case that the box comes with so I can change it up if I want to move the color choice in a different direction. I'll be writing about this whole setup and how I use it in more depth later so people who are interested can try it out too. These days I carry this little case around with me all the time so I can do some tiny oil paintings whenever I want. Great little hobby in a cafe, but you have to watch for the smell in case people in the cafe freak out about it.

More on all of this later.