The Billionaires vs. BrandonM

Recently Dropbox became one of the latest companies to be worth billions of dollars without turning a profit, and Drew Houston became a billionaire. I worked for Drew for a bit, and decided he was not the leader for me. If you'd like to see why, take a look at this:

What's the post he's referring to? Why it's an 11 year old post that dared to question what Dropbox did by one BrandonM: 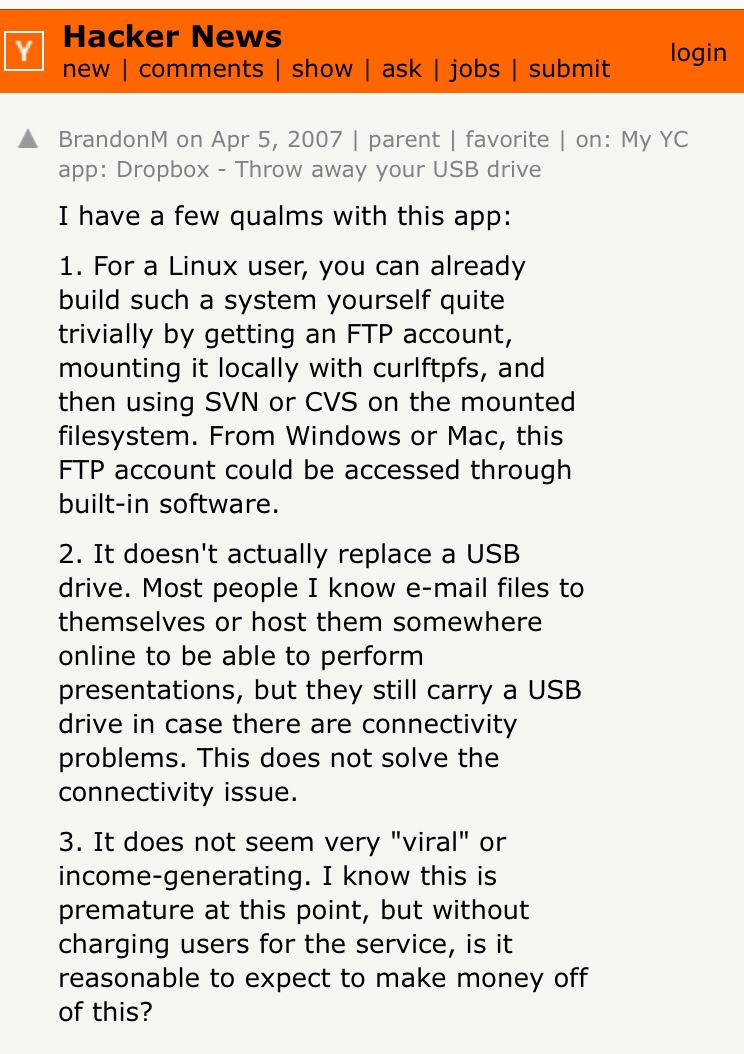 This comment, as BrandoM says, was from a 22 year old undergrad student who is now a 33 year old man and most likely a regular old working stiff. BrandonM is not a billionaire while Drew most definitely is one. BrandonM has absolutely zero power in this situation, and Drew has an infinite amount more by comparison. Additionally, what BrandonM said does not deserve this level of retribution. He did not insult Drew, did not say anything actually bad about Dropbox, was even polite after Drew did this.

Think about that for a second. A man who just became a billionaire (due to his large connections through MIT and his Fraternity) took time out of his day to hunt down a comment by a regular nobody 11 years later and throw his success back in that guy's face, and this man can do nothing about it because he can't delete his comment.

Now, let's add a little bit more to this problem:

What BrandonM wrote is not even abusive. It's just his viewpoint on what Dropbox does, and definitely not deserving of this kind of spiteful petty retribution 11 years later. This kind of behavior is common from Silicon Valley companies. They're big fans of the whole "waiting for your body on the river Ganges" thing, and if you ever once doubted them they'll hunt you down after their success just to shit on you. Never mind that the only reason most of these companies succeed is because they go to the same "cuddle puddle" parties as VCs do and went to the same school with the same frat. Nope, they totally made it on the glory of their shitty code and that's why your technical comments deserve retribution.

That isn't even the most abusive thing on HN that is still up. There's this gem from 9 years ago: 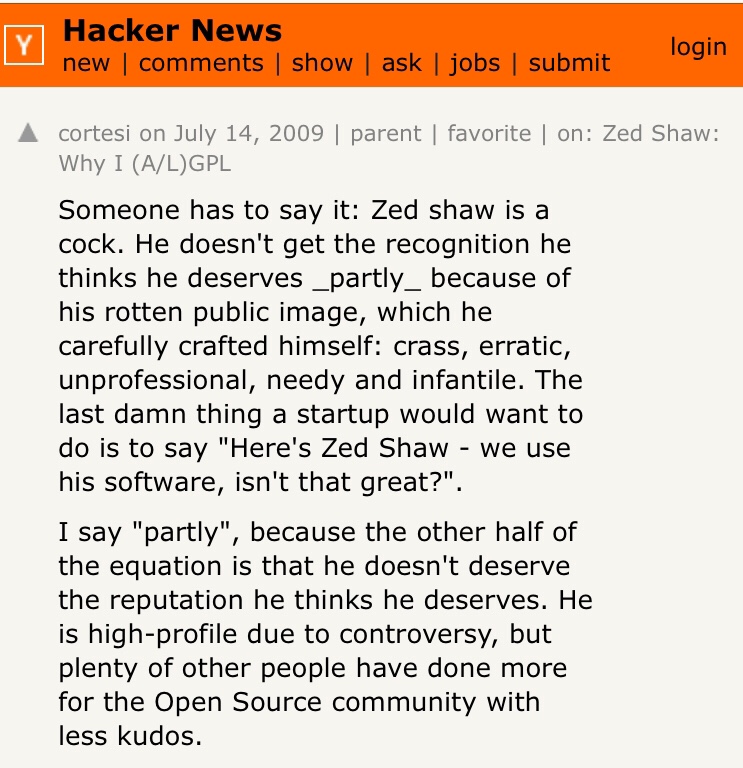 This cortesi fellow decided to call me a cock because.......I said I prefer to GPL my software because too many people abuse open source developers. Nowhere in my writing did I mention cortesi, and I don't even know him. But here he is calling me a cock for no other reason than I feel my work should have value. Did this get deleted? Nope. Moderators still have it up. I bet if cortesi could he might remove it. People change in 9 years.

No Delete Is Abusive

Everyone who runs YCombinator tries to pretend like they are decent liberal libertarian minded human beings. They start charities, donate money, attempt basic income experiments, and a host of things that I and many other people would label "progressive" or nearly communist.

Yet, their behavior in actually running their company is not even close to the fake progressive values they project. They have abysmal funding rates for minorities, women, people of color, coders over 40, and hell, anyone who didn't go to Stanford or an Ivy League school even. Their startups are constantly embroiled in the biggest sexual harassment abuse scandals we've ever seen. They frequently allow people on their forums to slander and abuse others, with only the thinnest veneer of moderation.

I believe the most important sign that YC is an abusive company is the fact that--contrary to several laws--they refuse to allow people to delete comments even a decade later. The entire combative nature of HN commenters means that people are going to make mistakes and those mistakes will haunt them, so preventing deletion is abusive.

The people running YCombinator have now demonstrated that they are not progressive or even good people. Here's Sam Altman--another incredibly rich man--again humiliating BrandonM years later:

This is a wealthy man, running a very wealthy company, supporting a billionaire in his quest to humiliate a common working guy for a comment that worker made 11 years ago. Sam has no idea how this will impact Brandon's life. He has no idea if this will hurt BrandonM, drive him to suicide, get him fired, yet he does it anyway.

Progressive or liberal people do not take advantage of their wealth and power to humiliate someone less powerful than they are over something this petty.

I actually agree with the sentiment that most of the people who comment on HN are clueless losers who just love trading slander through throwaway2342343 accounts. But, I also can't stand it when someone with power abuses their power to shit on someone who's just speaking their mind. I don't think BrandonM's comments fit into the "I could do that in a weekend" bullshit comments you hear. I think what he wrote was fairly valid...in 2007 for a Linux user.

In 2007 what BrandonM wrote is actually valid given the environment. It was a total long shot that Dropbox would go anywhere, and hell it took a whole 11 fucking years for them to IPO. Box did it in 2014 and competes rather well compared to Dropbox. But let's break down his comments from a 2007 perspective:

In my mind what BrandonM wrote was actually true, but it was short sighted and didn't take into account the value of going to MIT and being in the same frats as other guys who know really wealthy guys. Next time you see someone shit all over this guy, remember that 11 years ago, he was right and it could have gone totally differently with just one wrong move.