For the last year or so I've been obsessed with watching instructional videos for painting. I probably own a few thousand dollars worth of videos, plus a subscription to Lynda.com and ArtistsNetwork.tv and I may add another subscription site. I spend about 2-3 hours a week watching videos, and some weeks I may average one a day, especially if I'm trying to figure out a particular technique. What I would do is watch a video, and take notes along the way of what the artist says to do. Then I would watch another one, or I would test out the technique in a bunch of studies.

That's all changed thanks to Bob Ross, Johannes Vloothius, and Richard Robinson. Now I approach painting videos very differently and it's radically made learning to paint way more fun.

It all stars with me jokingly deciding to do one of the many Bob Ross DVDs I have purchased. Normally I watch Bob Ross's episodes when I'm bored and want some background noise or when I want to sleep. He's better than a pile of Ambien for going to sleep. One day I thought, "Hey, I know how to paint so what would happen if I followed along with Bob?" About three hours of fun and mess later I produced this: 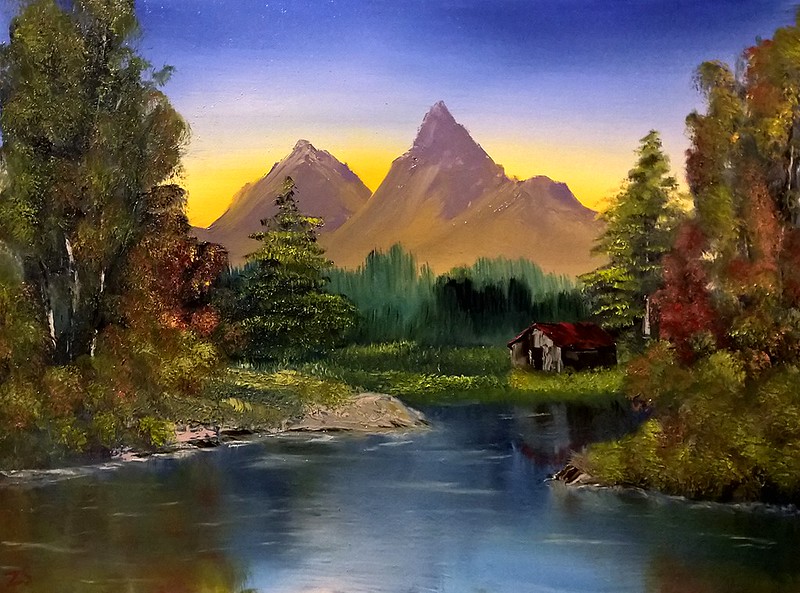 It was a hell of a lot of fun, and his method of painting is ridiculously easy to generate a landscape, but after that I just sort of forgot about it and put it on my list of fun late night things to do when I'm bored.

At the same time I'm watching videos I come across Johannes Vloothius' ImproveMyPaintings.com where he sells courses in landscape painting that are based on online webinars he does. They're full of lots of information and I started watching his lectures and painting to learn more of the clichés that landscape artists use to prove they "get it". Using his videos I painted the first painting I sold:

Yet, all I did was watch him paint and take notes. I'd remember many of the lecture points and most of the information, but when it came to applying them I'd just do studies or do nothing at all. The interesting thing about his courses is he follows each lecture on a subject with a demonstration in oil, watercolor, pastel, and acrylic. I would watch passively and see what he was doing but not much more than that.

It wasn't until I had watched a few Richard Robinson videos and then attended a workshop he gave in San Francisco that something clicked about painting videos. I bought a few of Richard's videos because I really liked his painting style. Johannes' lectures are full of information and he's a really good teacher, but I don't particularly like the paintings he does as demos. They're alright, and they are very instructive, but not really interesting to me. Richard's paintings are great, and even the demos are paintings I enjoy.

I figured if he was coming to San Francisco then I might as well take a workshop with him, and man he is a great teacher. During the workshop I challenged myself to paint large or odd formats, and during one day I painted this painting that someone walked by and offered to buy: 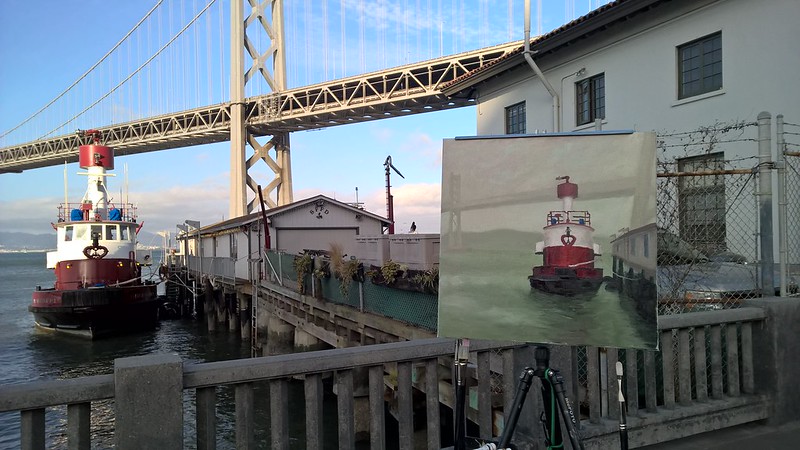 Pushing myself this way also helped me figure out an idea I've had for a new way to do drawings that is easy to do and really accurate. I'm still trying to figure out how to simplify it further so I can write about it, but here's the drawing I did on the final day of the workshop: 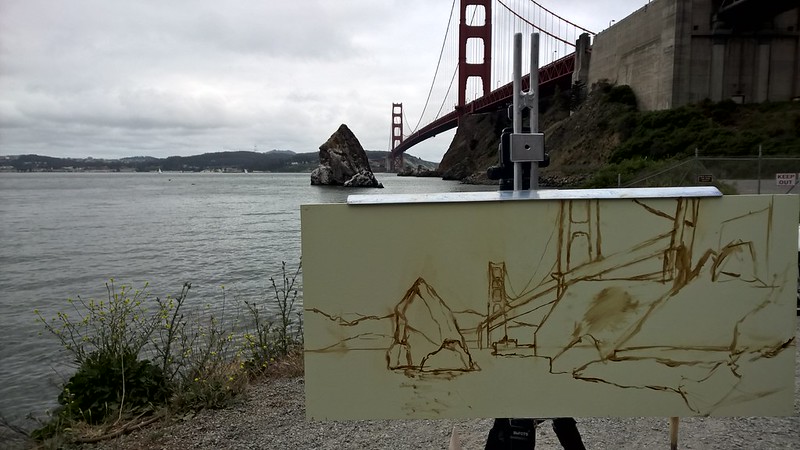 Here's the painting I made, although I'm not done with this one since I want to add more atmosphere to this blocked in painting: 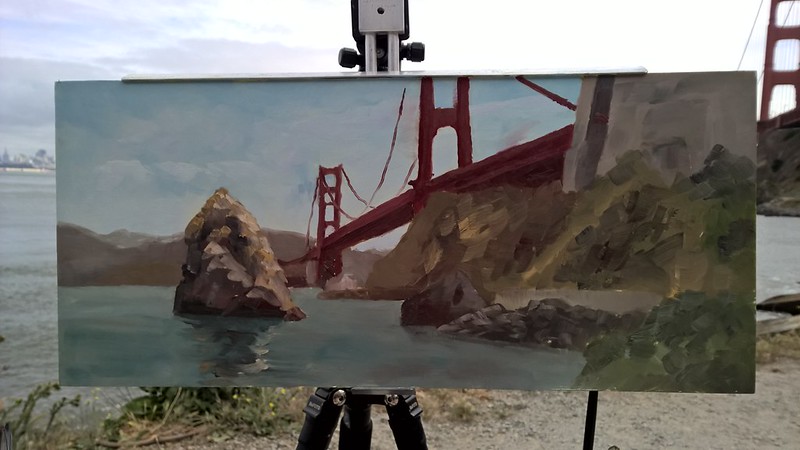 This was all so much fun and that workshop really worked well to push me into new territory with my landscapes, so I was interested in grabbing some more videos from Richard and watching them. I went and purchased this set of four videos from one of his workshops in Hawaii and then started watching them. I was hanging out in a cafe, and was mentally tired from writing all day, just wanting to relax, but I did have my paint box with me. I'm watching the videos, and then it hits me:

Why the fuck am I just watching this?! I have paint and supplies right here. I could follow along!

I busted out the paint box and started following along. I'd play the video a bit, see what he did, pause it, then replicate it. Sometimes I'd have to rewind some, or watch it for a bit to see the next move, then rewind and follow. When I was done it was all over and this was the aftermath of about 1.5 hours of painting with Richard: 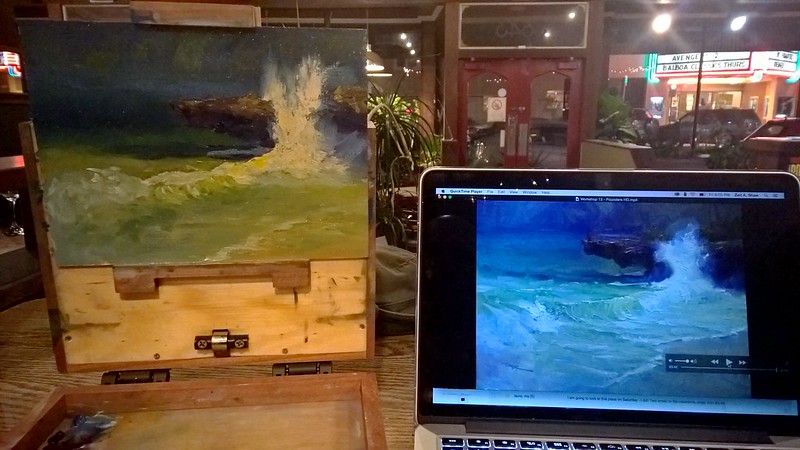 Not the greatest, but that's not important. What is important was that I learned way more from following along with Richard than I ever did just watching and taking notes. In fact, I think I've learned more doing this than I do at workshops and classes combined because I can pause the video and watch him do exactly that. I then followed along with the next video and produced this painting: 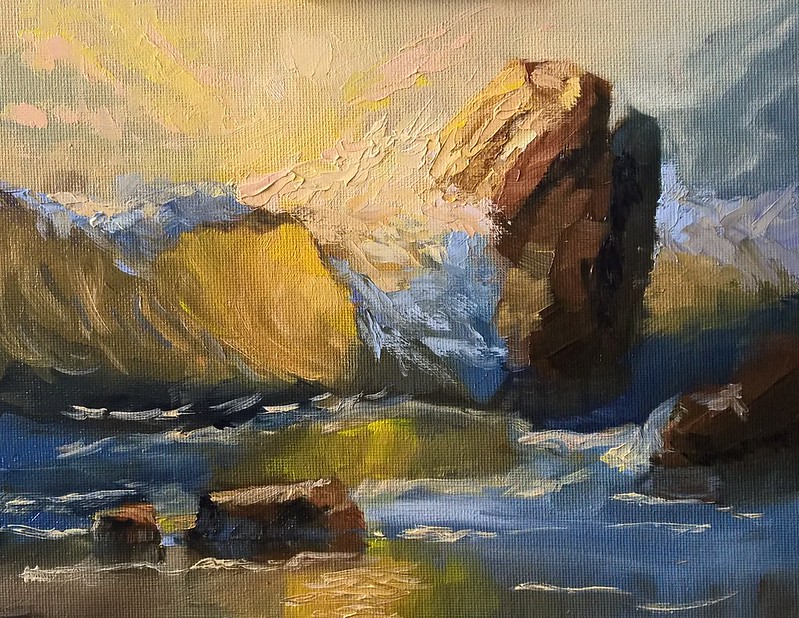 While again not the greatest painting, it is probably the best seascape painting I've ever painted and now I know how to make a glowing eye of a wave. This was also done with only two colors and a complimentary color scheme.

You might be thinking, "So what? Who cares if you can paint from a video?" The thing that this made me realize is I now have a way to always be able to paint even if there's not a very compelling subject to paint as well as the best way to learn from painting videos. In the past I'd drag my paintbox with me on the off chance I might see something I wanted to paint really quick. I think out of every 10 times I'd bring it I would actually stop and paint once. I'd sit at a cafe, working and look at the paintbox, then look around and see just walls and not really be interested then keep working.

Now I always have a subject to paint because if I have my laptop and my paintbox I can startup a video and paint along with any number of artists. They'll have the subject there already, so I can follow it, and they'll be teaching a subject. I can take 1-2 hour painting breaks whenever I want and learn something at the same time. I can even just take short 20 minute painting breaks throughout the day because I can pause the videos between breaks.

This is now revolutionizing my painting self-education. Rather than watch videos and read about painting and attempt the techniques later, I can paint along and get both a painting session done for the day and learn the most from the video.

How To Do It

If you want to do this then there's a few points of guidance that will help you out:

Hope that helps you out.