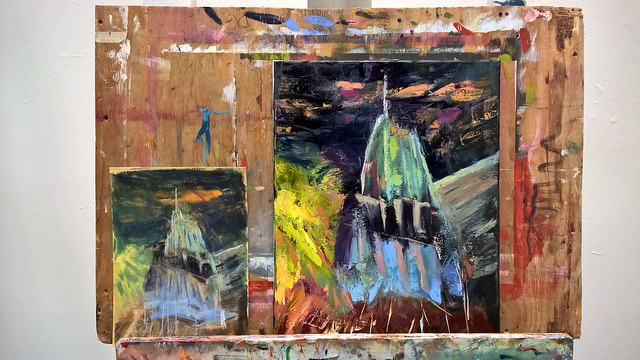 Liberal and Conservative in Painting

I’m working on a new painting series for a painting class involving landscapes and abstraction when it occurred to me that I could classify paintings across the dimensions of liberal and conservative. This isn’t really how you’d categorize paintings, but more how I could break them down as an exercise in exploring an abstract painting process that pushes me to create something different. This blog post is mostly my notes on how I plan to conceptualize this project than any form of critique of art.

To get started, here’s a simple abstraction of the Empire State Building that I did to play around with using pastels then making those into oil paintings:

I did this by first dorking around with pastels using the shapes from a photo. Once I had something I liked I then set it next to the canvas and tried to copy it. Fairly simple process, but I’d like to explore something a little different based on a joke I made a while back.

You see, I figured out that what Americans seem to like is a form of impressionism that is “correctly drawn, sloppily painted”. I was in this seminar where a guy painted a painting very well, everything drawn and painted solidly, then he took a kleenex and flopped it around on the canvas to fuck it up. It was if he couldn’t bring himself to paint it sloppy but knew that a sloppy painting with correct proportions and perspective would sell well. It gives it a dreamlike quality that seems to permeate American Impressionism, especially landscapes.

Thinking further it’s not really “correctly drawn, sloppily painted” but more of a contention between conservative and liberal, which to me very much defines the American experience. The drawing is conservative, with things in the correct places, building in perfect perspective, everything “right”, but then that perfection is thrown out because it’s boring. To make a conservatively drawn painting interesting the artist paints it liberally, altering colors and applying paint in sloppy application, or just fucking it up with a kleenex. It’s a safe cliché that lets you be conservative and prove you can paint correctly, but you just decide not too because you’re totally a liberal artist libertine type dude.

I then started to wonder if you can use these spectrums of liberal and conservative to view or create other paintings. What if you can put the drawing and paint application into categories of liberally done or conservatively done and then explore various styles?

This is most easily demonstrated as hyperrealist art or art that attempts to be a realist representation of the actual thing. Richard Estes would be a great example of the Conservative/Conservative extreme, and then you can get farther from that until you dance on the edge of the spectrum with artists like Quang Ho and Richard Schmid who are sometimes only slight conservative but never totally liberal in their drawing. For many in the American art market this brand of art is bourgeois and boring art that only your grandma likes. You could even go so far as to put a lot of Salvador Dali’s work into this category since his paintings are nearly perfectly rendered in drawing and painting, just the scenes and concepts are very surrealist.

Another group who falls into this category is illustrators, who are fascinated by lines, perfection, straightness, and the fantasy of photorealistic drawings even though the real world does not have lines between things. They are conservative in both drawing and “coloring" in the vast majority of their artwork.

One the other end of the spectrum would be artist who simply don’t give a total fuck about representation like artists such as Jackson Pollock. The derogatory term for this work is “wall decoration” since the random patterns seem to end up being props on the walls of the wealthy, but this motif seems to fit into the ideal of the full free liberal libertine artist just letting go. I’ve experienced where if I just paint at random and pretend I’m letting go that people seem to think I’m crafting genius when it’s just random bullshit. These are the paintings that you frequently see and then read the artist statements with their abuse of “vis-a-vis” and roll your eyes.

Some people counter the claims of bullshit with the thought that a painting doesn’t have to be about something. I think it was Jackson Pollock who said you don’t walk into a fucking rose garden and ask what it means. You just go in there because it’s pretty and you like it. Paintings can be just like that and don’t have to be about something. In general this is the far end of abstraction where you are taking and painting for painting’s sake, and not even trying to be accurate or representational.

In the middle we then have the idea of the drawing being liberal, or fucked up on purpose, but having the rest of the painting being more realistic. The classic example of this is Cubism, where the drawing is a mashup of all the angles of the thing, but that the painting, coloring, edges are taken from the real things. Salvador Dali and his early cubism then his later surrealism can also fit here. Sure he was a demanding painter who wanted a realistic looking feel to his painting, but then he would alter the drawing considerably to create surrealist landscapes. You could also put MC Escher into this category, or anyone who alters perspective but keeps realistic shading and color.

We then come to nearly much of the American Impressionism I was talking about, where the drawing is bang on accurate, but then they purposefully screw up the painting to make it seem expressive. I mentioned Quang Ho and Richard Schmid, but they are more typically in this camp closer to the conservative end. A great many other painters are much more liberal in their painting, and you’ll typically hear these artist says, “If you get the values and drawing right you can do anything with color.” They also alter or break edges in places that don’t make sense visually, but because the drawing is right people find it fascinating.

Clearly these are just generalizations to help me wrap my head around the concept. Think of them as me talking out loud about how to explore abstractions and the various skills of painting I want to attempt. Obviously you can find an artist who might straddle two or more of these, and I even can think of many. In fact, maybe that’s where the interest lies, in art that straddles the various lines in interesting ways or mixes these up. However, I’m talking cliché here, not original works. It’s a cliché to paint a painting nearly perfectly then bust out a kleenex to make it interesting by screwing up the paint. It’s also a cliché to numb your hands before you paint because that’s your “process” and weird process is currently selling like hotcakes. It’s yet another cliché to slap paint on a canvas randomly and then declare it a statement about the plight of the poor while you sell it for hundreds of thousands of dollars to rich asshole who will lock it in his million dollar apartment.

And lately I’ve been thinking that I’d like to explore these clichés and see what I can do with them, so I’m going to attempt a project that will explore these four dimensions.

The key is a methodical exploration of the subject by altering what about the painting is liberal or conservatively done. It will help me find out what is more fun or more interesting, and possibly if there’s a way to reach one from the other. Is it easier to make an abstraction from a super conservative painting, or is the inverse better?

I’ll start with this Empire State Building painting and tonight I’m going to attempt a Conservatively Drawn, but Liberally Painted version of it to see how this concept works out.