I’m currently dealing with a problem at Facebook where someone is impersonating me and Facebook refuses to do anything about it. I was notified by a friend that this profile zed.shaw was friending all of my actual friends and potentially messaging them as me. To stop the impersonator I wasn’t able to simply contact Facebook and have the profile taken down. Instead I had to signup for my own profile zed.a.shaw and file a bug report with them.

This amounts to extortion. If Facebook is claiming to require real names and identities on its platform, and requiring people to signup for Facebook to eliminate impostors, then they are extorting signups out of people. Your only choice is to become a Facebook member and reserve your spot in their ad driven world even if you don’t want to use their platform at all (which I don’t).

However, this gets worse. Here is their reply when I submitted the only kind of ticket I could figure out how to submit to correct the impostor: 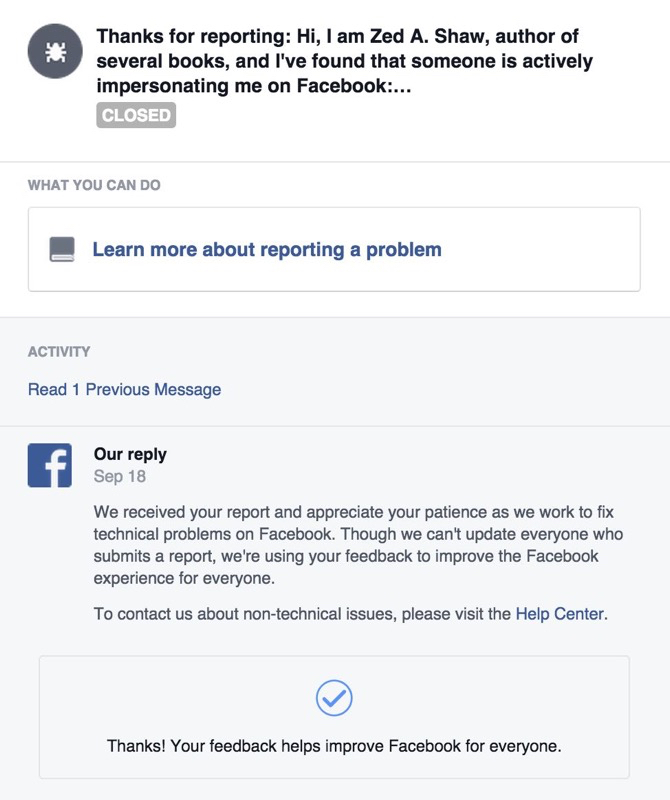 And the impostor is accepting Happy Birthday messages (on a day that’s not my birthday):

This is proof the impostor is actually impersonating me, and Facebook chose to do nothing about it.

Rather than solve my problem they’re playing the typical bureaucratic game of telling me that I haven’t properly filled out the correct forms and submitted to the proper department to resolve this issue, please try again. For a company that is claiming to create a safe space for everyone, even creating an anti-bullying hub, this is unbelievable. I should not have to navigate Facebook’s problem reporting system to have this resolved.

In my case this could get potentially worse for Facebook. I’m a published author with an actual business reason to not have impostors on a platform like Facebook. Imagine if this person decided to start contacting potential readers and slandering me. Or posting offensive messages pretending to be me so that readers of my books found them. Well honestly I doubt this guy could do that better than me, but the point is, they could invent some form of slander that would ruin my book sales. This person could also ruin my relationships with friends who are currently following the impostor account. Since Facebook refuses to take the account down and transfer control to me, and they claim to enforce identity giving visitors a false sense of security in trusting this impostor, then Facebook is actually the one causing the slander.

I believe that their actions could fall under both the Safe Harbor laws for sites and possibly the spam laws, but it’s vague. In the case of the safe harbor laws, they are exerting editorial control on identities and failing to enforce that means that allowing impostors makes them liable for any slander. In the case of the spam laws (much less possible) they are requiring people to sign up for Facebook to report problems, and also making the process onerous and difficult. The laws against spam require that people can unsubscribe from all contact with a company without logging in, and I believe you should be able to report abuse of a profile in the same way. Much like a DMCA takedown or spam unsubscribe, I shouldn’t have to be a member of a social platform to report an abusive account on that platform.

Right now I’ve contacted the impostor and asked them to give up the account, since Facebook can’t, but I should not have to contact an abuser to have this resolved. The entire point of having a system to report problems from abusive people is that I don’t want to talk to the abusive person. I want their impostor account wiped out and all the messages they’ve sent to my real actual friends given to me so that I can make sure I was not maligned. There should be one page that I go to report an account for abuse, and that’s it. This extorting my eyeballs into viewing their shitty ads just to get an abusive asshole off my name is entirely wrong.