What If It Worked?

I talk about people sending me suicide threats in this essay. If you are contemplating suicide, then please call the National Suicide Hotline at 1-800-273-8255. There is no shame in asking for help, so make the call.

I receive about 1-3 angry emails a month regarding my positions on various things. The latest round of "Fuck You Zed" emails was regarding my stance on Python 3 being a complete waste of human energy. That's understandable as many people who have absolutely no lives at all tend to attach their narcissistic egos to fake things in order to add some desperate level of meaning to their pathetic totally useless lives.

People are so attached to their programming languages that they even hate newbies who just don't ask the right questions in IRC.

We've all, as a community, decided that beginners are on the list of people we all can hate. I mean, if this is how someone treats a dude who just wants to get the end of a file, can you imagine how they feel about me?

I'm sure this <feline> asshole is just sooooooo tired of beginners coming and asking stupid questions, but then you wonder why the fuck they're on IRC in the first place if it's such a total waste of time? Actually, I know why. They can hide behind the internet, safe from a solid punch in the face, and treat people like crap to make themselves feel better about basically being total losers. Seriously, if the vast majority of your authority in life comes from ASCII text caps lock screaming at people just trying to learn something then you have got to be one of the biggest losers out there.

But, let's say you've spent your evening treating innocent people like shit with your ASCII BLAST importance and your insecure narcism just really isn't healed. You are still resentful of the fact that you've memorized every page of the ANSI C standard and nobody recognizes that as the pure genius it actually is. You were in the SPECIAL KIDS class God Motherfucking Dammit! You were destined for greatness! You worked, like, sort of hard too so it should be you that's famous!

Nope, you are stuck as a PHP programmer, toiling away for peanuts making billionaires wealthy when really it should be you, Mr. Gifted Fear Failure Esquire, getting the book deals and not that asshole Zed A. Shaw. Who fuck is that guy anyway? He constantly makes mistakes while he's putting out all his books, and code, and content, and paintings, and building guitars, and playing guitars, and you know what, fuck that guy. You know what you're going to do!

I get a few death threats too. My most recent one was this: 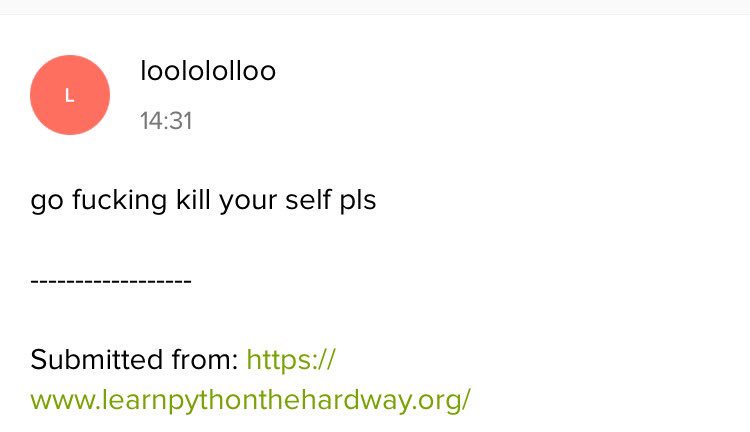 If they give a valid email address I usually rip them a new one. You see, violence is a bad thing, but self-defense is not. Sure, you may hurt someone, you may even kill them, but if they were trying to kill you or hurt you, then you've actually prevented an evil thing by stomping them into the ground. And there's one thing I've learned over decades of dealing with violent people:

Violent people do not respond to kind words and reason. They only respond to being hurt. After you're done kicking their ass, sure, they might be amenable to reevaluating their life. Chances are though they are sociopaths and that means they are not going to change. Same goes for narcissists. Psychology still can't figure out how to cure either afflictions, and in the world of violence, narcissism and sociopathy go hand in hand. Can't cure them or stop them with words, so your only option is harm.

You are perfectly allowed to use violence to defend yourself or someone you love. Sheeeeeiit, martial arts were invented by Buddhist monks for this damn reason. I think if Buddhist monks can have this attitude then you can my friend. In fact, I think allowing violence when you can stop it is just as bad as doing it yourself.

But I received this threat and couldn't reply to the loser who sent it because he wasn't man enough to enter an email address. I just posted it on Twitter and then moved on with my life. At least, until I realized something.

People Die From This

If you ever read news about online bullying you'll see the obvious tragedy of suicide and abuse. What you'll also see is a complete lack of remorse from the perpetrators. They'll usually choose someone who is an outcast in their society. A nerd, a poor kid, or someone with some disability that gives the abuser a reason--blessed by society--to hate the victim.

Once the larger group decides that this person is a valid target the sociopaths take their cue and feel justified in their abuse. At first it's maybe name calling, then it escalates to humiliation, destruction of their livelihood, life, and then escalating further until they've driven the poor outcast to the edge at which point, they give the push. That one little tug, aimed at a human being weak from continuous abuse, and designed to make them end their life.

And when the killer gets caught, almost universally one of the first things they claim is they didn't do it because it was a suicide. It wasn't their fault, they didn't actually kill them, and it becomes clear the abuser, the killer, is not remorseful. It was not a game. It was not an accident. It was a calculated act following a calculated chain of abuse designed to destroy another human being for no real reason. They'll claim the victim wasn't even human. The victim did some incredibly terrible thing, that turns out to be something minor. The abuser will do anything to avoid admitting that they killed someone. Society said they could kill them. Why aren't they getting a trophy?

You see this with child abusers, spouse abusers, bullies, rapists, and many sociopathic killers. You'll ask them why and they'll tell you the victim deserved it. Why? They ate a yogurt. They wore a short dress that day. Their skin was different. They voted for the wrong politician. They like the wrong genitals. It's always something that is incredibly trivial in the grand scheme of things, but it doesn't matter what the victim did. All the victim actually did was exist and happen to give their murderer or abuser an excuse to exercise his or her desire to satisfy their narcissistic need to hurt someone that day.

I started wanting to know why someone would send this? I mean, did they think it'd work? They would send a one line sentence with poor grammar and I'd jump off my building? I'd blast myself in the face with a shotgun? I'd drink some drano? Slit my wrists in the tub? Did they think it through? What if I was having a particularly bad day and all that was needed was this tiny push? This message that I'm worthless and unloved. That I'm a nobody who deserves to die because...

I don't agree with the direction of Python 3. Or maybe, I wrote a thing about abusive people in Ruby ten years ago. Yes, TEN years ago. Or maybe I hate Haskell? Like I said, once a community decides I deserve it, the reason doesn't matter. Any reason is good enough to justify the abuser's actions.

Whatever their reason, I don't need the answer. I know it all too well. I know this person is a pathetic fucking loser. I know they wrote that hoping I would die, hoping to kill me, but needed an excuse, and my disagreement with this totally inert concept called Python/Ruby/Haskell is all they needed. Their community has crafted the right amount of propaganda and cohesion to allow any decision about my "asshole" status be the abuser's cue that I'm fair game. They can threaten to kill me, force me to suicide, and it's alright. I deserve it right? I mean I hate Python 3. That's important.

If people think that I'm easily intimidated or threatened they're sadly mistaken. I've defended myself from abuse most people could never have survived, and some little worm pumping chars into a web form is an ant by comparison.

Now, I try my best to be good to people, but I have a very strong sense of self-defense and vengeance. I try to be careful with it, but I have no problem destroying someone who tries to hurt me. Like I said, you have a right to defend yourself and people you love. I'm also definitely not some little weak snowflake nerd, and I definitely am not going to kill myself because some pathetic weakling took 10 minutes to write a sentence demanding I do so. Fuck you.

More importantly though--and this I hope really pisses this asshole off--my life is fucking awesome and I'm in the best mood and position I've ever been in romantically, financially, socially, and in every way that mister Help Form Killer can't possibly compare. While this guy was wasting time filling out this shit I was probably doing something awesome. Shit, I was probably doing 10 awesome things that day.